Matthew Wall at BBC News: “While emergency response teams, medical charities and non-governmental organisations struggle to contain the virus, could big data analytics help?
A growing number of data scientists believe so….
Mobile phones, widely owned in even the poorest countries in Africa, are proving to be a rich source of data in a region where other reliable sources are sorely lacking.
Orange Telecom in Senegal handed over anonymised voice and text data from 150,000 mobile phones to Flowminder, a Swedish non-profit organisation, which was then able to draw up detailed maps of typical population movements in the region.
Authorities could then see where the best places were to set up treatment centres, and more controversially, the most effective ways to restrict travel in an attempt to contain the disease.
The drawback with this data was that it was historic, when authorities really need to be able to map movements in real time. People’s movements tend to change during an epidemic.
This is why the US Centers for Disease Control and Prevention (CDC) is also collecting mobile phone mast activity data from mobile operators and mapping where calls to helplines are mostly coming from. 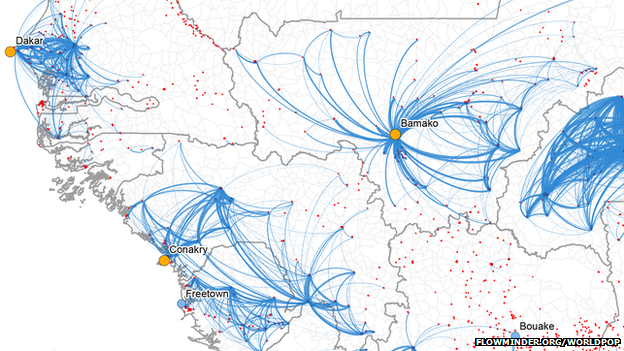 A sharp increase in calls to a helpline from one particular area would suggest an outbreak and alert authorities to direct more resources there.
Mapping software company Esri is helping CDC to visualise this data and overlay other existing sources of data from censuses to build up a richer picture.
The level of activity at each mobile phone mast also gives a kind of heatmap of where people are and crucially, where and how far they are moving.

“The most positive impact we can have is to help emergency relief organisations and governments anticipate how a disease is likely to spread.
“Until now they had to rely on anecdotal information, on-the-ground surveys, police and hospital reports.”…