Book Review by Edward Kosner of “Information Doesn’t Want to Be Free”in the Wall Street Journal: “Do you feel like a thief when you click on a website link and find yourself reading an article or listening to a song you haven’t paid for? Should you? Are you annoyed when you can’t copy a movie you’ve paid for onto your computer’s hard drive? Should you be? Should copyright, conceived in England three centuries ago to protect writers from unscrupulous printers, apply the same way to creators and consumers in the digital age?
The sci-fi writer, blogger and general man-about-the-Web Cory Doctorow tries to answer some of these questions—and introduces others—in “Information Doesn’t Want to Be Free.” Billed as a guide for perplexed creators about how to make a living in the Internet Era, the book is actually a populist manifesto for the information revolution.
Mr. Doctorow is a confident and aphoristic writer—his book is like one long TED talk—and his basic advice to creators is easy to grasp: Aspiring novelists, journalists, musicians and other artists and would-be artists should recognize the Web as an unprecedented promotional medium rather than a revenue source. Creators, writes Mr. Doctorow, need to get known before they can expect to profit from their work. So they should welcome having their words, music or images reproduced online without permission to pave the way for a later payoff.
Even if they manage to make a name, he warns, they’re likely to be ripped off by the entertainment-industrial complex—big book publishers, record companies, movie studios, Google , Apple and Microsoft. But they can monetize their creativity by, among other things, selling tickets to public shows, peddling “swag”—T-shirts, ball caps, posters and recordings—and taking commissions for new work. 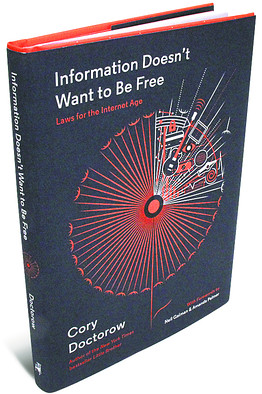 He cites the example of a painter named Molly Crabapple, who, inspired by the Occupy Wall Street movement, raised $55,000 on the crowdsourcing site Kickstarter, rented a storefront and created nine huge canvases, seven of which she sold for $8,000 each. Not the easiest way to become the next Jeff Koons, Taylor Swift or Gillian Flynn.
But Mr. Doctorow turns out to be less interested in mentoring unrealized talent than in promulgating a new regime for copyright regulation on the Internet. Copyright has been enshrined in American law since 1790, but computer technology, he argues, has rendered the concept obsolete: “We can’t stop copying on the Internet because the Internet is a copying machine.” And the whole debate, he complains, “is filled with lies, damn lies and piracy statistics.”
There’s lots of technical stuff here about digital locks—he calls devices like the Kindle “roach motels” that allow content to be loaded but never offloaded elsewhere—as well as algorithms, embedded keys and such. And the book is clotted with acronyms: A diligent reader who finishes this slim volume should be able to pass a test on the meaning of ACTA, WIPO, WPPT, WCT, DMCA, DNS, SOPA and PIPA, not to mention NaTD (techspeak for “Notice and Take Down”).
The gist of Mr. Doctorow’s argument is that the bad guys of the content game use copyright protection and antipiracy protocols not to help creators but to enrich themselves at the expense of the talent and the consumers of content. Similarly, he contends that the crusade against “net neutrality”—the principle that Internet carriers must treat all data and users the same way—is actually a ploy to elevate big players in the digital world by turning the rest of us into second-class Netizens.
“The future of the Internet,” he writes, “should not be a fight about whether Google (or Apple or Microsoft) gets to be in charge or whether Hollywood gets to be in charge. Left to their own devices, Big Tech and Big Content are perfectly capable of coming up with a position that keeps both ‘sides’ happy at the expense of everyone else.”…”