The Living Library Index – inspired by the Harper’s Index – provides important statistics and highlights global trends in governance innovation. This installment focuses on participation and civic engagement and was originally published in 2013.

A new pamphlet by Irving Wladawsky-Berger et al for the Royal Society (RSA):  “The history of economic development has been characterised by periods of massive transformation brought about by technological  innovation. As well as creating new industries, technology transforms the  ways we live and work. Steam power led to industrialisation and rapid urbanisation, electricity enabled the assembly line and mass production of consumer goods, the automobile encouraged mass mobility and the development of suburban living, and the internet and world wide web have revolutionised access to communications and knowledge. It is very hard to anticipate the consequences of such enormously disruptive technologies. Technology continues to surprise, seen, for example, in the unexpected growth of SMS messaging and social networking and the massive changes brought about by online media and music.
This pamphlet is concerned with a profoundly transformative technology, one that affects a crucial element of the fabric of society. It examines digital money, a technology that moves economic transactions, payments, remittances, transfers etc, from the physical into the digital world. Just as communications and publishing have been transformed by digital technologies, so too will financial services. The progress of digital money will inevitably surprise us and it will develop in unexpected ways, but we believe it is on the cusp of delivering a remarkable transformation in the global economy. It will end the divide between those who can and those who cannot participate in formal economic transactions. It may usher in a new era of more inclusive innovation that involves billions of more people around the world in constructing the services that affect their future…”
M DODGSON, D GANN, I WLADAWSKY-BERGER

Meredith Salisbury from Techonomy: “Social networking for scientists has been tried before, but not until recently have we seen investors placing big bets in this area. Earlier this year, the academic networking site Mendeley was acquired by scientific publisher Elsevier for somewhere in the ballpark of $70 million. And today brings a new data point: Berlin-based ResearchGate, a site designed to facilitate collaborations and data sharing among scientists around the world, has raised $35 million in a series C round from investors including Bill Gates….While social networking has upended how business happens in other industries, the centuries-old traditions of the scientific field have largely blocked this kind of change. Sure, scientists sign up for Facebook and LinkedIn like anybody else. But use a social networking tool to facilitate research, find partners, and share data that hasn’t yet been published? That’s been a tough sell in the hyper-competitive, highly specialized scientific community….But ResearchGate’s Madisch believes he is making inroads—and that his latest round of funding, along with its big-name investors, is proof of that. The site boasts 2.8 million users, and features a number of tools and capabilities designed to lure scientists. Madisch knows that scientists are unlikely to share data that could be included in a valuable peer-reviewed publication, so instead he encourages users to share data from failed experiments that will never be submitted for publication anyway. There’s a lot less possessiveness around that data, and Madisch contends that failures are just as important as successes in helping people understand what works under certain circumstances.Another widget calculates a scientist’s reputation score based on interactions within ResearchGate; this number offers an alternative way to look at any scientist’s impact within the field beyond the current gold standard, which simply associates a person’s value with the reputation of the journals he or she gets published in.
What’s most important to Madisch, though, is the site’s ability to connect scientists around the world and allow better research to happen faster. He cites the example of a young child who died from an unknown cause in Nigeria; a local doctor sent samples to a scientist in Italy he found on ResearchGate, and together they identified a new pathogen responsible for the child’s death. Further analysis was conducted by a Dutch researcher, also found through the networking site.
For Madisch, this anecdote embodies the ResearchGate mentality: The more you collaborate, the more successful you’ll be.”

Paper by Teresa Harrison in latest issue of the Journal “Participations“: “From a purely technical perspective, no one, including Tim Berners-Lee, has ever been able to pinpoint exactly what makes Web 2.0 unique. What may be most accurate to say, is that the enormous popularity of social networking and other social media technologies hinges on a radical reconceptualisation of the audience, now routinely incorporated into ICT applications. Once treated as passive consumers of content created by others, designers of these applications now appreciate and exploit, the fact that new media users (formerly known as the “audience”) actively create content online to serve their own goals, frequently as they interact with others. Users of Web 2.0 applications display and tinker with their identities, express themselves on all kinds of topics, invent new products and ideas, and, as Don Tapscott, Tim O’Reilly and legions of other business gurus hasten to remind us, are willing, so far at least, to lend their problem solving, creative efforts and intellectual products to businesses seeking to innovate, or just looking for free marketing. Hoping to harness this largely uncompensated labour, organisations of all types (both commercial and non-profit) have been quick to find ways to attract these “producers” to their projects.
Governments have not been the swiftest in this regard, however, they may present the most ambitious and optimistic agenda for involving internet users. Nations around the world now hope to use new media to engage their citizens in some variation of participatory governance. Where once the prospects for “town hall style democracy,” were doomed by the limitations and inefficiencies of one-way media transactions, the networked interactivity of social media now makes it technically feasible to invite citizen participation on a routine basis. What is not yet clear is how citizens will react over the long term to these invitations and what kinds of social issues and software applications will best attract and immerse them into new citizenship practices.”

Book description: “Mainstream quantitative analysis and simulations are fraught with difficulties and are intrinsically unable to deal appropriately with long-term macroeconomic effects of disasters. In this new book, J.M. Albala-Bertrand develops the themes introduced in his past book, The Political Economy of Large Natural Disasters (Clarendon Press, 1993), to show that societal networking and disaster localization constitute part of an essential framework to understand disaster effects and responses.
The author’s last book argued that disasters were a problem of development, rather than a problem for development. This volume takes the argument forward both in terms of the macroeconomic effects of disaster and development policy, arguing that economy and society are not inert objects, but living organisms. Using a framework based on societal networking and the economic localization of disasters, the author shows that societal functionality (defined as the capacity of a system to survive, reproduce and develop) is unlikely to be impaired by natural disasters.”

Tom Kalil, Deputy Director for Technology and Innovation at OSTP : “As we enter the second year of the Big Data Initiative, the Obama Administration is encouraging multiple stakeholders, including federal agencies, private industry, academia, state and local government, non-profits, and foundations to develop and participate in Big Data initiatives across the country.  Of particular interest are partnerships designed to advance core Big Data technologies; harness the power of Big Data to advance national goals such as economic growth, education, health, and clean energy; use competitions and challenges; and foster regional innovation.
The National Science Foundation has issued a request for information encouraging stakeholders to identify Big Data projects they would be willing to support to achieve these goals.  And, later this year, OSTP, NSF, and other partner agencies in the Networking and Information Technology R&D (NITRD) program plan to convene an event that highlights high-impact collaborations and identifies areas for expanded collaboration between the public and private sectors.”

Experian: “Insights from Experian, the global information services company, reveals that if the time spent on the Internet was distilled into an hour then a quarter of it would be spent on social networking and forums across UK, US and Australia. In the UK 13 minutes out of every hour online is spent on social networking and forums, nine minutes on entertainment sites and six minutes shopping.” 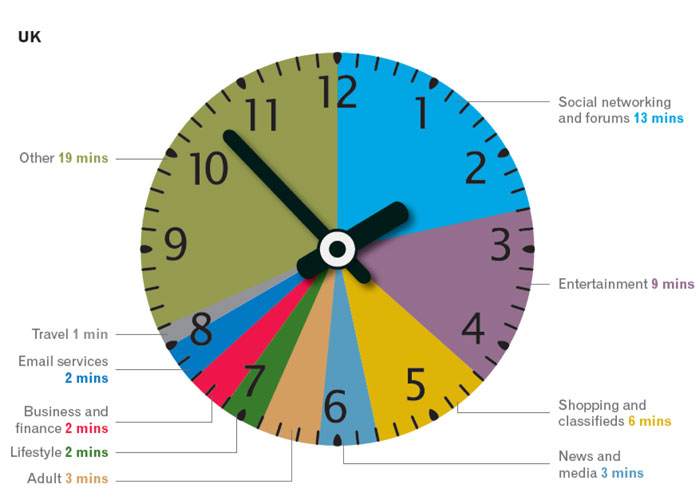