Robyn Scott & Lisa Witter at SSIR: “…Our research found that “disconnection” falls into five, negatively reinforcing categories in the public sector; a closer look at these categories may help policy makers see the challenge before them more clearly:

There is a truism in politics and government that all policy is local and context-dependent. Whether this was ever an accurate statement is questionable; it is certainly no longer. While all policy must ultimately be customized for local conditions, it absurd to assume there is little or nothing to learn from other countries. Three trends, in fact, indicate that solutions will become increasingly fungible between countries…..

What climate change policy can endure without a job-creation strategy? What sensible criminal justice reform does not consider education? Yet even within countries, departments and their employees often remain as foreign to each other as do nations….

…There are areas of increasingly visible progress in bridging the disconnections of government, citizen engagement being one. We’re still in the early stages, but private sector fashions such as human-centered design and design thinking have become government buzzwords. And platforms enabling new types of citizen engagement—from participatory budgeting to apps that people use to report potholes—are increasingly popping up around the world…..

According to the World Bank’s own data, one third of its reports are never read, even once. Foundations and academia pour tens of millions of dollars into policy research with few targeted channels to reach policymakers; they also tend to produce and deliver information in formats that policymakers don’t find useful. People in government, like everyone else, are frequently on their mobile phones, and short of time….(More)” 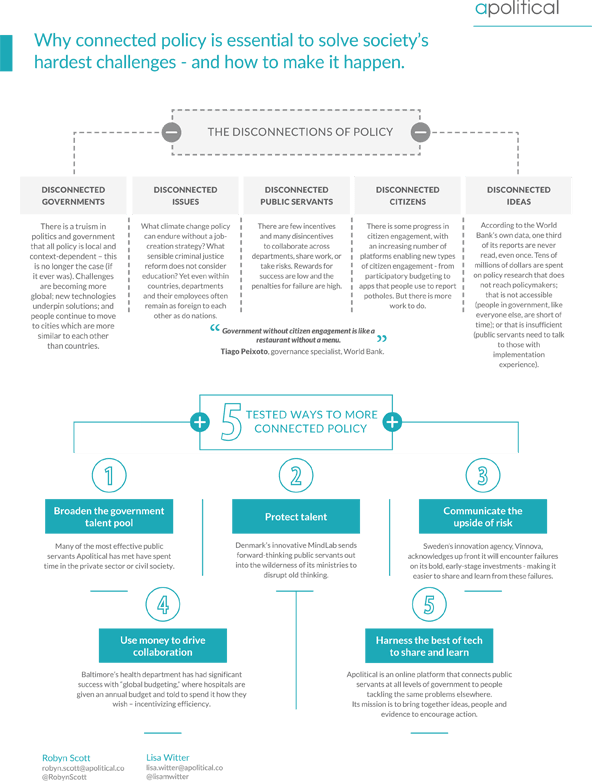