Pew Global: “A deepening anxiety about the future of democracy around the world has spread over the past few years. Emboldened autocrats and rising populists have shaken assumptions about the future trajectory of liberal democracy, both in nations where it has yet to flourish and countries where it seemed strongly entrenched. Scholars have documented a global “democratic recession,” and some now warn that even long-established “consolidated” democracies could lose their commitment to freedom and slip toward more authoritarian politics.

A 38-nation Pew Research Center survey finds there are reasons for calm as well as concern when it comes to democracy’s future. More than half in each of the nations polled consider representative democracy a very or somewhat good way to govern their country. Yet, in all countries, pro-democracy attitudes coexist, to varying degrees, with openness to nondemocratic forms of governance, including rule by experts, a strong leader or the military. 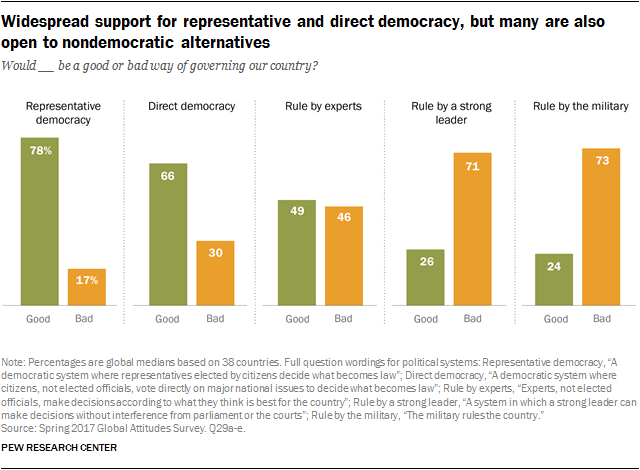 A number of factors affect the depth of the public’s commitment to representative democracy over nondemocratic options. People in wealthier nations and in those that have more fully democratic systems tend to be more committed to representative democracy. And in many nations, people with less education, those who are on the ideological right and those who are dissatisfied with the way democracy is currently working in their country are more willing to consider nondemocratic alternatives.

At the same time, majorities in nearly all nations also embrace another form of democracy that places less emphasis on elected representatives. A global median of 66% say direct democracy – in which citizens, rather than elected officials, vote on major issues – would be a good way to govern. This idea is especially popular among Western European populists….(More)”