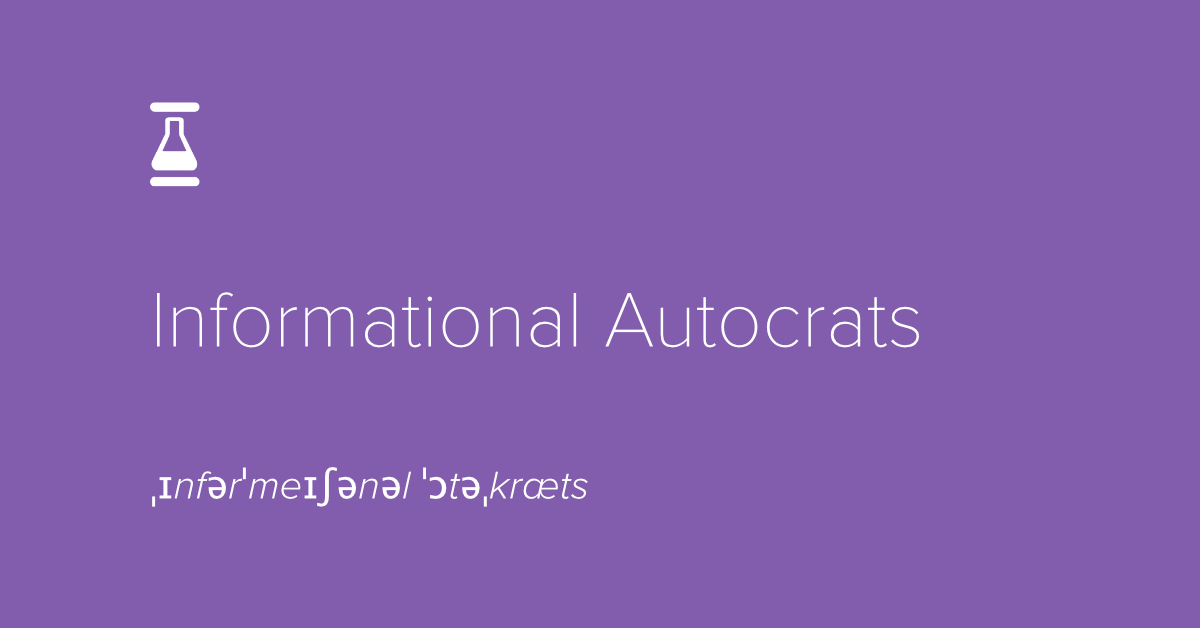 Rulers who control and manipulate information in order to maintain power. (Guriev and Treisman, 2019)

“In this article, we document the changing characteristics of authoritarian states worldwide. Using newly collected data, we show that recent autocrats employ violent repression and impose official ideologies far less often than their predecessors. They also appear more prone to conceal rather than to publicize cases of state brutality. Analyzing texts of leaders’ speeches, we show that “informational autocrats” favor a rhetoric of economic performance and provision of public services that resembles that of democratic leaders far more than it does the discourse of threats and fear embraced by old-style dictators. Authoritarian leaders are increasingly mimicking democracy by holding elections and, where necessary, falsifying the results.

“A key element in our theory of informational autocracy is the gap in political knowledge between the “informed elite” and the general public. While the elite accurately observes the limitations of an incompetent incumbent, the public is susceptible to the ruler’s propaganda. Using individual-level data from the Gallup World Poll, we show that such a gap does indeed exist in many authoritarian states today. Unlike in democracies, where the highly educated are more likely than others to approve of their government, in authoritarian states the highly educated tend to be more critical. The highly educated are also more aware of media censorship than their less-schooled compatriots.”

Separately, Andrea Kendall-Taylor, Erica Frantz, and Joseph Wright, in Foreign Affairs, echo the above suggestion, in that:

“Dictatorships can also use new technologies to shape public perception of the regime and its legitimacy. Automated accounts (or “bots”) on social media can amplify influence campaigns and produce a flurry of distracting or misleading posts that crowd out opponents’ messaging.”

“Digital tools might even help regimes make themselves appear less repressive and more responsive to their citizens. In some cases, authoritarian regimes have deployed new technologies to mimic components of democracy, such as participation and deliberation.”

Globalization of ideas and technological advances have contributed to creating a hostile environment for traditional and overt dictatorship. At the same time, this combination has also been misused by informational autocrats to advance their own interests. Promoting accountability across all sectors through open government data and algorithmic transparency, for example, can prevent such effort to control and manipulate information.