Geekwire: “At the heart of Seattle’s Pioneer Square neighborhood exists a unique juxtaposition.
Inside a two-story brick building is the Impact Hub co-working space and business incubator, a place where entrepreneurs are busily working on ideas to improve the world we live in. 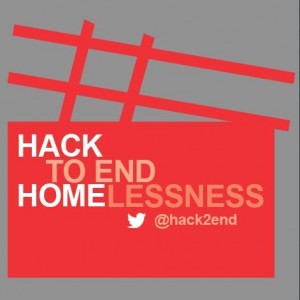 But walk outside the Impact Hub’s doors, and you’ll enter an entirely different world.
Homelessness. Drugs. Violence.
Now, those two contrasting scenes are coming together.
This weekend, more than 100 developers, designers, entrepreneurs and do-gooders will team up at the Impact Hub for the first-ever Hack to End Homelessness, a four-day event that encourages participants to envision and create ideas to alleviate the homelessness problem in Seattle.
The Washington Low Income Housing Alliance, Real Change and several other local homeless services and advocacy groups have already submitted project proposals, which range from an e-commerce site showcasing artwork of homeless youth to a social network focusing on low-end mobile phones for people who are homeless.
Seattle has certainly made an effort to fix its homelessness problem. Back in 2005, the Committee to End Homelessness established a 10-year plan to dramatically reduce the number of people without homes in the region. By the end of 2014, the goal was to “virtually end,” homelessness in King County.
But fast-forward to today and that hasn’t exactly come to fruition. There are more than 2,300 people in Seattle sleeping in the streets — up 16 percent from 2013 — and city data shows nearly 10,000 households checking into shelters or transitional housing last year. Thousands of others may not be on the streets or in shelters, yet still live without a permanent place to sleep at night.
While some efforts of the committee have helped curb homelessness, it’s clear that there is still a problem — one that has likely been affected by rising rent prices in the area.
Candace Faber, one of the event organizers, said that her team has been shocked by the growth of homelessness in the Seattle metropolitan area. They’re worried not only about how many people do not have a permanent home, but what kind of impact the problem is having on the city as a whole.
“With Seattle experiencing the highest rent hikes in the nation, we’re concerned that, without action, our city will not be able to remain the dynamic, affordable place it is now,” Faber said. “We don’t want to lose our entrepreneurial spirit or wind up with a situation like San Francisco, where you can’t afford to innovate without serious VC backing and there’s serious tension between the housing community and tech workers.”
That raises the question: How, exactly, can technology fix the homeless problem? The stories of these Seattle entrepreneurs helps to provide the answer.

FROM SHELTERS TO STARTUPS

Kyle Kesterson knows a thing or two about being homeless.
That’s because the Freak’n Genius co-founder and CEO spent his childhood living in 14 different homes and apartments, in addition to a bevy of shelters and transitional houses. The moving around and lack of permanent housing made going to school difficult, and finding acceptance anywhere was nearly impossible.
“I was always the new kid, the poor kid, and the smallest kid,” Kesterson says now. “You just become the target of getting picked on.”
By the time he was 15, Kesterson realized that school wasn’t a place that fit his learning style. So, he dropped out to help run his parents’ house-cleaning business in Seattle.
That’s when Kesterson, now a talented artist and designer, further developed his creative skills. The Yuba City, Calif. native would spend hours locked in a room perusing through deviantART.com, a new Internet community where other artists from around the world were sharing their own work and receiving feedback.
…
So now Kesterson, who plans on attending the final presentations at the Hack for Homelessness event on Sunday, is using his own experiences to teach youth about finding solutions to problems with a entrepreneurial lens. When it comes to helping at-risk youth, or those that are homeless, Kesterson says it’s about finding a thriving and supportive environment — the same one he surrounded himself with while surfing through deviantART 14 years ago.
“Externally, our environment plays a significant role in either setting people up for growth and success, or weighting people down, sucking the life out of them, and eventually leaving them at or near rock bottom,” he said.
For Kesterson, it’s entrepreneurs who can help create these environments for people, and show them that they have the ability and power to solve problems and truly make a difference.
“Entrepreneurs need to first focus on the external and internal environments of those that are homeless,” he said. “Support, help, and inspire. Become a part of their network to mentor and make connections with the challenges they are faced with the way we lean on our own mentor networks.”

Lindsay Caron Epstein has always, in some shape or form, been an entrepreneur at heart.
She figured out a way to survive after moving to Arizona from New Jersey with only $100. She figured out how to land a few minimum wage jobs and eventually start a non-profit community center for at-risk youth at just 22 years old.
And now, Caron using her entrepreneurial spirit to help figure out ways to fix social challenges like homelessness.
The 36-year-old is CEO and founder of ActivateHub, a startup working alongside other socially-conscious companies in Seattle’s Fledge Accelerator. ActivateHub is a “community building social action network,” or a place where people can find local events put on by NGOs and other organizations working on a wide variety of issues.
Caron found the inspiration to start the company after organizing programs for troubled youth in Arizona and studying the homelessness problem while in school. She became fascinated with how communities were built in a way that could help people and pull them out of tough situations, but there didn’t appear to be an easy way for people to get involved.
“If you do a Google search for poverty, homelessness, climate change — any issue you care about — you’ll just find news articles and blogs,” Caron explained. “You don’t find who in your community is working on those problems and you don’t find out how you can get involved.”
Caron says her company can help those that may not have a home or have anything to do. ActivateHub, she said, might give them a reason to become engaged in something and create a sense of value in the community.
“It gives people a reason to clean up and enables them to make connections,” said Caron, who will also be attending this weekend’s event. “Some people need that inspiration and purpose to change their situation, and a lot of times that motivation isn’t there.”
Of course, ActivateHub alone isn’t going to solve the homelessness problem by itself. Caron knows this and thinks that entrepreneurs can help by focusing on more preventative measures. Sure, technology can be used to help connect homeless people to certain resources, but there’s a deeper issue at hand for Caron…”