Mark Stencel at Duke Reporters’ Lab: “The high volume of political truth-twisting is driving demand for political fact-checkers around the world, with the number of fact-checking sites up 50 percent since last year.

The Duke Reporters’ Lab annual census of international fact-checking currently counts 96 active projects in 37 countries. That’s up from 64 active fact-checkers in the 2015 count. (Map and List) 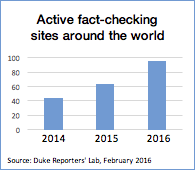 A bumper crop of new fact-checkers across the Western Hemisphere helped increase the ranks of journalists and government watchdogs who verify the accuracy of public statements and track political promises. The new sites include 14 in the United States, two in Canada as well as seven additional fact-checkers in Latin America.There also were new projects in 10 other countries, from North Africa to Central Europe to East Asia…..

The growing numbers have even spawned a new global association, the International Fact-Checking Network hosted by the Poynter Institute, a media training center in St. Petersburg, Florida.

Some of the growth has come in the form of promise-tracking. Since January 2015, fact-checkers launched six sites in five countries devoted to tracking the status of pledges candidates and party leaders made in political campaigns. In Tunisia, there are two new sites dedicated to promise-tracking — one devoted to the country’s president and the other to its prime minister.

There are another 20 active fact-checkers elsewhere that track promises,…

The other fact-checkers are typically associated with non-governmental, non-profit and activist groups focused on civic engagement, government transparency and accountability. A handful are partisan, especially in conflict zones and in countries where the lines between independent media, activists and opposition parties are often blurry and where those groups are aligned against state-controlled media or other governmental and partisan entities….(More)“