William Galston in the Wall Street Journal: “Transparency is very nearly the opposite of privacy. In the current controversy, it is a demand that the government make public matters it conducts in private and wants to keep private. 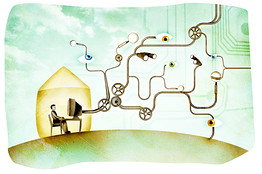 The argument for disclosure goes like this: If the government is acting in the name of the people, the people need to know what their government is doing. How else can they judge these activities? Democratic government means accountability to the public, and accountability requires disclosure. History testifies to the link between secrecy and the abuse of public power. Without disclosure, the people will find it difficult to restrain government’s excesses—most importantly, secret activities that could endanger our liberties.
Government transparency has a distinguished history. In 1795, Immanuel Kant propounded what is often called the principle of publicity: Roughly, if you cannot reveal the principle that guides your policy without undermining that policy, then the policy itself is fatally flawed from a moral point of view.
Little more than a century later, in his famous “Fourteen Points” speech about U.S. war aims and the principles that would guide the peace, President Woodrow Wilson called for “Open covenants of peace, openly arrived at, after which there shall be no private international understandings of any kind but diplomacy shall proceed always frankly and in the public view.”…
Yet the relation between collective security and individual liberty is not zero-sum. Because another 9/11-scale terrorist event might well lead to even more intrusive antiterrorism measures, reducing the likelihood of such an event could end up preventing serious infringements on liberty. Up to a point, liberty and security can be mutually reinforcing. But at what point do they become opposed?
This is not a judgment that can be left to experts in the executive branch. Ultimately, the people, acting through their elected representatives, must decide—and it is hard to see how they can do so unless all representatives, not just a select few, have the information they need to participate in such a decision. As we learned in the 1970s, however, public deliberation on intelligence matters is anything but cost-free.”