Stuart Taylor Jr in the Wall Street Journal: “Amid the liberal-conservative ideological clash that paralyzes our government, it’s always refreshing to encounter the views of Philip K. Howard, whose ideology is common sense spiked with a sense of urgency. In “The Rule of Nobody,” Mr. Howard shows how federal, state and local laws and regulations have programmed officials of both parties to follow rules so detailed, rigid and, often, obsolete as to leave little room for human judgment. He argues passionately that we will never solve our social problems until we abandon what he calls a misguided legal philosophy of seeking to put government on regulatory autopilot. He also predicts that our legal-governmental structure is “headed toward a stall and then a frightening plummet toward insolvency and political chaos.”
Mr. Howard, a big-firm lawyer who heads the nonpartisan government-reform coalition Common Good, is no conventional deregulator. But he warns that the “cumulative complexity” of the dense rulebooks that prescribe “every nuance of how law is implemented” leaves good officials without the freedom to do what makes sense on the ground. Stripped of the authority that they should have, he adds, officials have little accountability for bad results. More broadly, he argues that the very structure of our democracy is so clogged by deep thickets of dysfunctional law that it will only get worse unless conservatives and liberals alike cast off their distrust of human discretion.
The rulebooks should be “radically simplified,” Mr. Howard says, on matters ranging from enforcing school discipline to protecting nursing-home residents, from operating safe soup kitchens to building the nation’s infrastructure: Projects now often require multi-year, 5,000-page environmental impact statements before anything can begin to be constructed. Unduly detailed rules should be replaced by general principles, he says, that take their meaning from society’s norms and values and embrace the need for official discretion and responsibility.
Mr. Howard serves up a rich menu of anecdotes, including both the small-scale activities of a neighborhood and the vast administrative structures that govern national life. After a tree fell into a stream and caused flooding during a winter storm, Franklin Township, N.J., was barred from pulling the tree out until it had spent 12 days and $12,000 for the permits and engineering work that a state environmental rule required for altering any natural condition in a “C-1 stream.” The “Volcker Rule,” designed to prevent banks from using federally insured deposits to speculate in securities, was shaped by five federal agencies and countless banking lobbyists into 963 “almost unintelligible” pages. In New York City, “disciplining a student potentially requires 66 separate steps, including several levels of potential appeals”; meanwhile, civil-service rules make it virtually impossible to terminate thousands of incompetent employees. Children’s lemonade stands in several states have been closed down for lack of a vendor’s license. 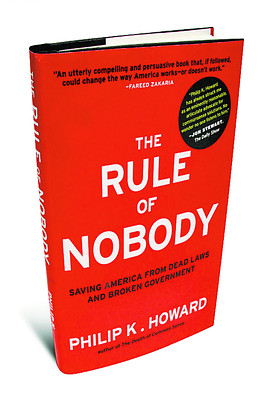 Conservatives as well as liberals like detailed rules—complete with tedious forms, endless studies and wasteful legal hearings—because they don’t trust each other with discretion. Corporations like them because they provide not only certainty but also “a barrier to entry for potential competitors,” by raising the cost of doing business to prohibitive levels for small businesses with fresh ideas and other new entrants to markets. Public employees like them because detailed rules “absolve them of responsibility.” And, adds Mr. Howard, “lawsuits [have] exploded in this rules-based regime,” shifting legal power to “self-interested plaintiffs’ lawyers,” who have learned that they “could sue for the moon and extract settlements even in cases (as with some asbestos claims) that were fraudulent.”
So habituated have we become to such stuff, Mr. Howard says, that government’s “self-inflicted ineptitude is accepted as a state of nature, as if spending an average of eight years on environmental reviews—which should be a national scandal—were an unavoidable mountain range.” Common-sensical laws would place outer boundaries on acceptable conduct based on reasonable norms that are “far better at preventing abuse of power than today’s regulatory minefield.”
“As Mr. Howard notes, his book is part of a centuries-old rules-versus-principles debate. The philosophers and writers whom he quotes approvingly include Aristotle, James Madison, Isaiah Berlin and Roscoe Pound, a prominent Harvard law professor and dean who condemned “mechanical jurisprudence” and championed broad official discretion. Berlin, for his part, warned against “monstrous bureaucratic machines, built in accordance with the rules that ignore the teeming variety of the living world, the untidy and asymmetrical inner lives of men, and crush them into conformity.” Mr. Howard juxtaposes today’s roughly 100 million words of federal law and regulations with Madison’s warning that laws should not be “so voluminous that they cannot be read, or so incoherent that they cannot be understood.”…