Skip to content
Book review by Roger Kimball: “It’s surprising to me that the English historian Jeremy Black isn’t better known on these shores. He has written dozens of books on subjects as various as the Battle of Waterloo, the history of the slave trade, both world wars and the rise of European power in the 18th century. His bibliography includes books about maps and naval power, and even “The Politics of James Bond.” What is more, he commands an engaging prose style and possesses an outlook appealingly grounded in the principles of a high but undoctrinaire Toryism. This combination of fluency and wide-ranging erudition are conspicuously on display in “The Power of Knowledge,” an ambitious, synoptic, “big idea” book that is likely to extend the frontiers of Mr. Black’s audience in this country.
The thesis of the book is neatly encapsulated in the title of Chapter 13: “Information Is All.” The idea that there is an intimate link between knowledge and what we might call administrative power is perennial. It is inscribed in the nature of things that the more you know, the more you control.
The technological side of that syllogism, Mr. Black notes, didn’t really come to the fore until the 17th century. “Knowledge is Power,” wrote Francis Bacon, enunciating a principle that seems obvious only because we have been the beneficiaries of the processes he helped to define. Writing a few years later, René Descartes promised that his method of inquiry would make man “the master and possessor of nature.” Descartes looked forward to all manner of material benefits, not least in the realm of medicine. He was prescient.
Mr. Black touches on Bacon and Descartes in his chapter on the Scientific Revolution, but his focus is much more encompassing. He begins his story with the formation of the Mongol Empire in the 13th century and describes how the Great Khan’s superior deployment of information, prominently including his command of trade along the Silk Road, stood behind the creation of the largest contiguous empire in history. 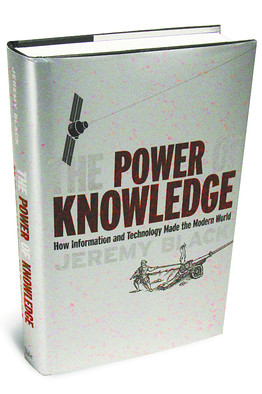 The guiding theme of this book is the complex linkage (what Mr. Black calls “synergies”) between information and power—political power, above all, but also military, economic and technological power. The increasingly sophisticated acquisition and manipulation of information, Mr. Black argues, is “a defining characteristic of modernity,” and it fueled the rise and shaped the distinctiveness of the West from the 18th century through the early 21st.

Part of what makes modernity modern—and a large part of what has made the West its crucible—is the interpenetration of information and technique under the guidance of an increasingly secularized idea of human flourishing. Other cultures made local contributions to this drama, but Mr. Black is right: The breathtaking spectacle of modern technological achievement has been overwhelmingly a Western achievement. This fact has been a source of great sadness for politically correct exponents of multiculturalism. Mr. Black knows this, but he early on hedges his account to avoid “triumphalism.”
As Mr. Black concedes, many of the master terms of his narrative are “porous.” What, after all, is information? It is data, yes, but also statistics, rumor, propaganda and practical know-how. All enter into the story he tells, but their aggregation makes for an argument that is more kaleidoscopic than discursive.
The very breadth of Mr. Black’s subject makes reading “The Power of Knowledge” partly thrilling, partly vertiginous. It is a long journey that Mr. Black engages here, but all of the stops are express stops. There is no lingering. In a section on advances in maritime charting, for example, he mentions that an equivalent was the development during the Renaissance of one-point perspective using mathematical rules. True enough, but that rich topic is confined to a few sentences. Still, the book bristles with interesting tidbits. I took some smuggish satisfaction in knowing that the term “bureaucracy” was coined by a Frenchman (de Gournay) but that we owe “scientist” to the British geologist William Whewell.
Although deeply grounded in history from the Middle Ages on down, this book also conjures with contemporary issues. Some are technical, like the vistas of information unraveled in the human genome project. Some are political. Until fairly recently, Mr. Black notes, central governments lacked the mechanisms to intervene consistently in everyday life. That, as anyone who can pronounce the acronym “NSA” knows, has changed dramatically. Mr. Black devotes an entire chapter to what he calls “the scrutinized society.” The effort to control public opinion and the flow of information has been most flagrant in totalitarian regimes, but he shows that in democracies, too, information is “filtered and deployed as part of the battle for public opinion.”…