Blog Post by Beth Noveck:  “…The Inter-American Development Bank (IADB) has published an important, practical and prescriptive report with recommendations for every sector of society from government to individuals on innovative and effective approaches to combatting corruption. While focused on Latin America, the report’s proposals, especially those on the application of new technology in the fight against corruption, are relevant around the world…. 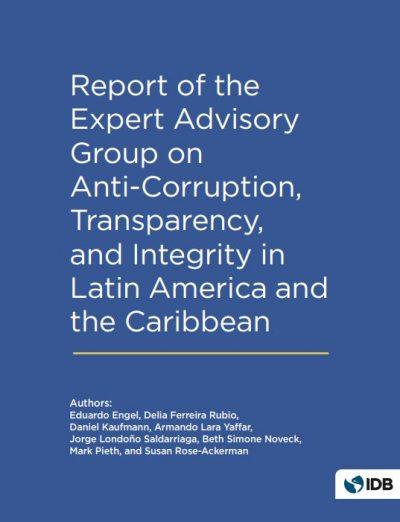 The recommendations about the use of new technologies, including big data, blockchain and collective intelligence, are drawn from an effort undertaken last year by the Governance Lab at New York University’s Tandon School of Engineering to crowdsource such solutions and advice on how to implement them from a hundred global experts. (See the Smarter Crowdsourcing against Corruption report here.)…

Big data, when published as open data, namely in a form that can be re-used without legal or technical restriction and in a machine-readable format that computers can analyze, is another tool in the fight against corruption. With machine readable, big and open data, those outside of government can pinpoint and measure irregularities in government contracting, as Instituto Observ is doing in Brazil.

Opening up judicial data, such as information about case processing times, judges’ and prosecutors’ salaries, information about selection processes, such as CV’s, professional and academic backgrounds, and written and oral exam scores provides activists and reformers with the tools to fight judicial corruption. The Civil Association for Equality and Justice (ACIJ) (a non-profit advocacy group) in Argentina uses such open justice data in its Concursos Transparentes (Transparent Contests) to fight judicial corruption. Jusbrasil is a private open justice company also using open data to reform the courts in Brazil….(More)”